See on Scoop.it – The Truth Behind the Headlines 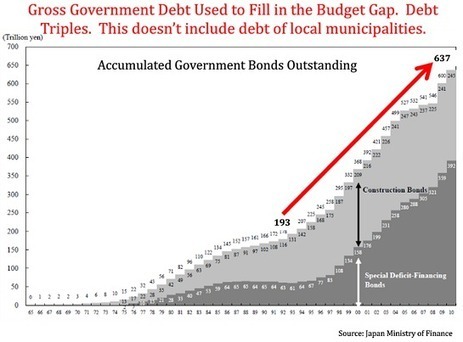 Submitted by Charles Hugh-Smith of OfTwoMinds blog,While all eyes are on the absurdist tragicomedy playing out in Europe, Japan is quietly circling a financial black hole as its export economy is destroyed by its strong currency and the global…

Nonsense from the otherwise excellent Charles Hugh-Smith.  By focusing on nothing but the debt situation and how the strong Yen impacts exports, he is missing the other very obvious par t of the equation, that imports are cheaper.  This is simple import/export stuff that has been forgotten in all of the idiotic mercantilism propagated constantly and parroted by poeple who should, frankly, know better.

Japan’s companies are deploying those strong Yen in the trillions around SE Asia and in doing so are effectively getting younger, the same way that China is.  This notion that political borders determines a countries demographics is worthless and clouds rational analysis. Young, cheap Vietnamese working in a suzuki Factory are economically tied to Japan’s production base and Vietnam’s consumption base.

I’ve been hearing for years how the strong Yen will kill Japan’s export markets but it hasn’t happened yet.  Only in 2011 when a large chunk of their economy was swept out to sea nad rendered unusable from radiation did they finally run a current account deficit even though the Yen has been strengthening around the world for more of the century, oh by the way.

The strong Yen shook compaies like Toyota up and made them wake up to the quality of their competition.  And it is making their cars better, which is why they’ll sell 10 million cars and trucks this year.

Publisher of the Gold Goats n Guns. Ruminations on Geopolitics, Markets and Goats.